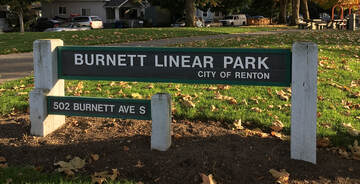 A series of whimsical mini-murals installed behind street signs around the Burnett Linear Park in Renton WA. Each design is based on, or highlights, some element of Renton's fascinating history. This project was commissioned by the City of Renton working in conjunction with the South Renton Neighborhood Art Committee. Many thanks to Jeff Dineen and Jessie Kotarski for facilitating this project.

To view these mini-murals, walk around the Burnett Linear Park and look behind street signs. ​Installed November 2019 by @ArtByVikram.
Click on any image below to see a larger version.
To purchase any of these designs as prints, please contact the artist.

Women have always played an integral, take-charge part in Renton's history. An anecdote that highlights this fact happened back in 1899 when sparks from a train triggered a fire in Renton. An enterprising band of women quickly set up a bucket brigade to put out the fire, drawing water from a nearby railway engine. This emergency bucket brigade became the precursor to Renton's Fire Department.

Renton had an early commitment to education, with the first school in King County, the 'Black River School', founded in 1854 on the homestead of Christian Clymer, one of the original settlers in the Renton area. The school was a simple, single room log cabin. However, it was located on the 'wrong side' of the river and students could only reach the school either by canoe or by crossing over the fishing weirs across the river. 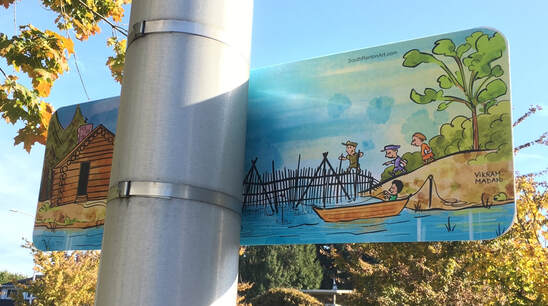 The first non-native person to explore the present-day Renton area was Colonel Isaac Ebey who explored much of the Puget Sound in his canoe, including paddling up the Black River till he reached present-day Lake Washington, which he christened 'Lake Geneva' (a name that, thankfully, did not stick). His glowing reports of the land and the natural beauty of the region was instrumental in attracting settlers to the region. 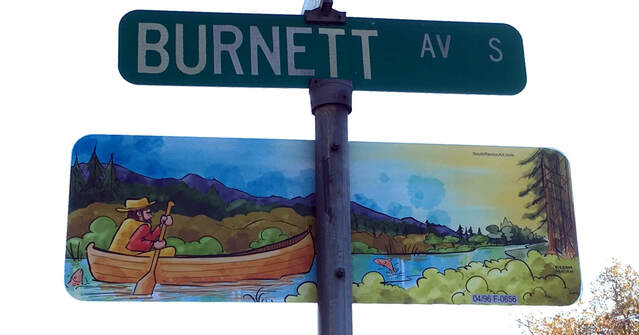 People came to early Renton from all over the world, including immigrants from Austria, Poland, Serbia, Italy, China, Japan, Scotland, Ireland, Belgium, and Wales, and migrants from many parts of the United States. Most of them worked in the coal and lumber industries. Despite the back-breaking and dangerous nature of the work, and the paltry pay, many of the workers were able to support families and put down roots in the area.

With three rivers in proximity, (Black, White, and Cedar) Renton flooded often, including a memorable flood in 1911 that inundated the city. People would have to travel by boats, and sometimes boats would get stranded on the poles they were tied to when flood waters receded. With the connecting of Lake Washington to Lake Union in 1916, the Cedar river was redirected to drain into Lake Washington, causing the Black river to dry up completely, and greatly reducing flooding in the area.

06. When Cattle Came To Town

With the opening of the Black River Bridge in the 1860s, cattlemen east of the mountains were able to drive their herds to Seattle, and sometimes the cattle drive would go right through the heart of the Renton area.

Renton had prominent industries early on, including lumber and sawmills, coal mining, dairy farms, tile and brick factories, bottle factories, and industrial companies like PACCAR. Together, the commerce and economic activity from these industries built Renton up. 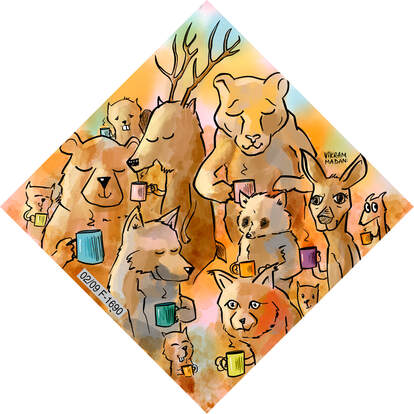 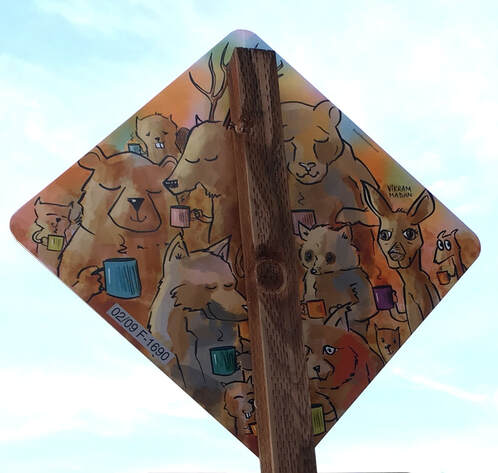 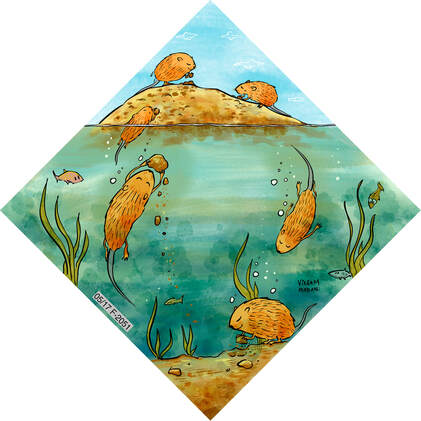 The Duwamish tribe are the original inhabitants of the Renton area.
​In one of their creation myths, land was formed when Muskrat dove down to the bottom of the ocean and brought up clods of wet earth which Muskrat then shaped into islands and land. 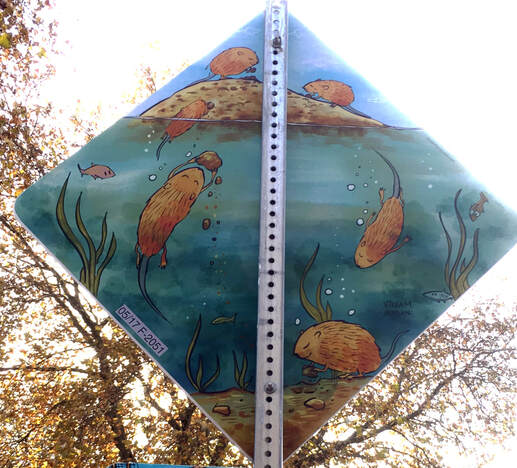 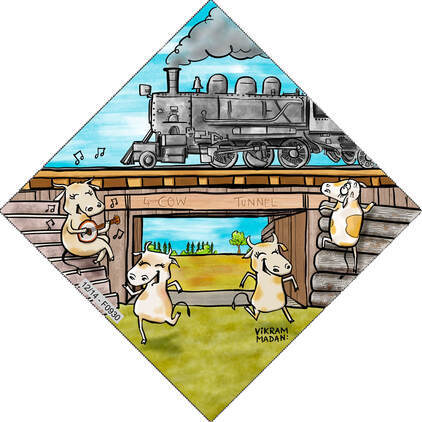 When original Renton homesteader Erasmus Smithers allowed the Seattle and Walla-Walla Railroad company to build a railroad track across his lands, in 1877, he stipulated that the railroad company build a tunnel that was 'FOUR COWS WIDE' in order to let his cows move freely across his land. The tunnel came to be known as the '4 Cow Wide Tunnel'. 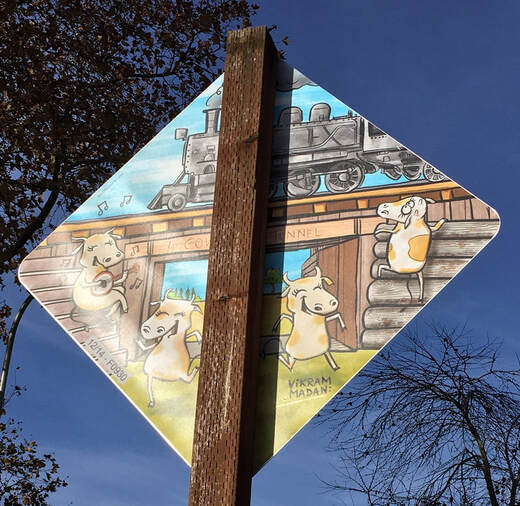 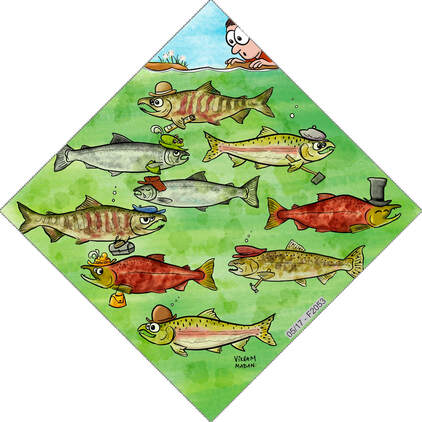 The original Renton area was home to many different species of Salmon, including Sockeye, Coho, Pink, Chum, Steelhead, and Chinook. 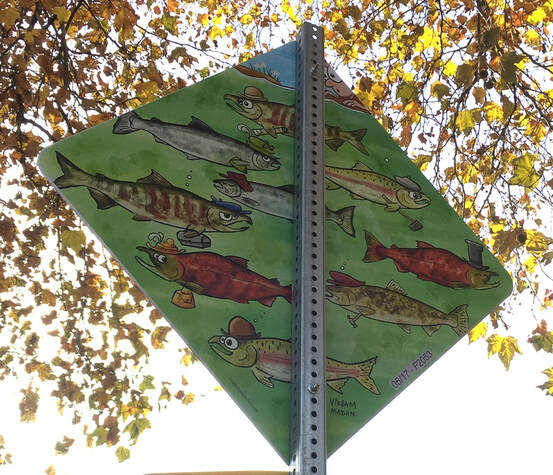 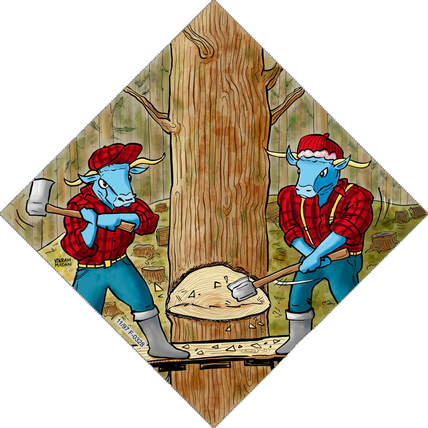 Logging was an important early industry in Renton and oxen played such an invaluable role in bringing timber down the hills that they were as important to the lumber industry as lumberjacks themselves. 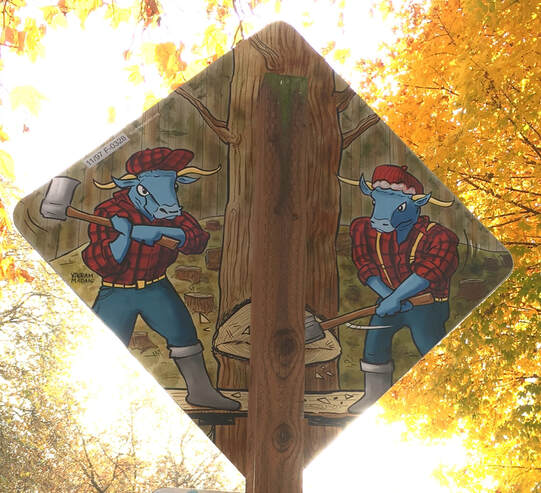 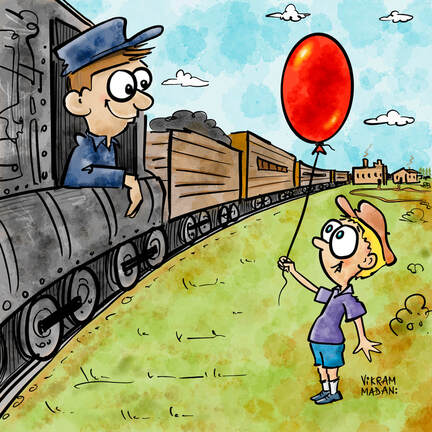 Trains have always been an integral part of Renton, moving goods and people. Renton loves trains. Always has. 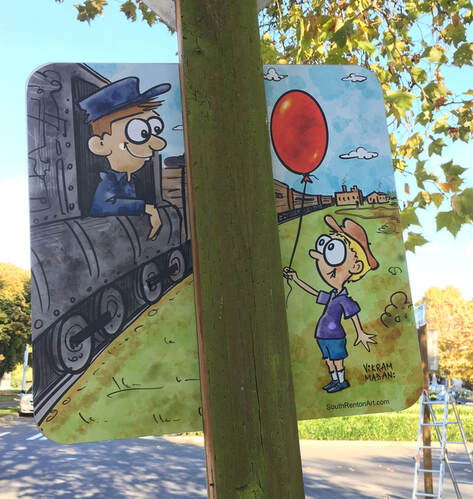 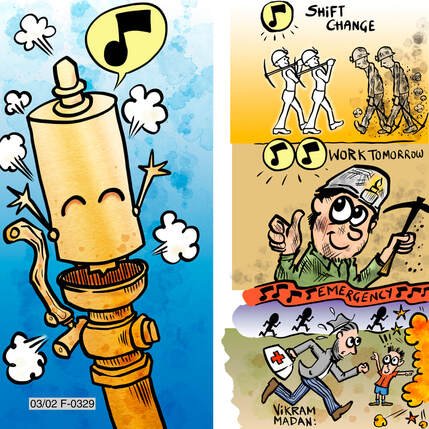 Life in the coal mine was regulated by the 'WHISTLE'.

When the whistle blew once, it marked the twice-a-day shift change between fresh miners and weary miners.

When the whistle blew twice, that was a signal that there would be work the next day for the miners.

When the whistle blew continuously, that was an alarm indicating a drastic event such as a cave-in or fire. 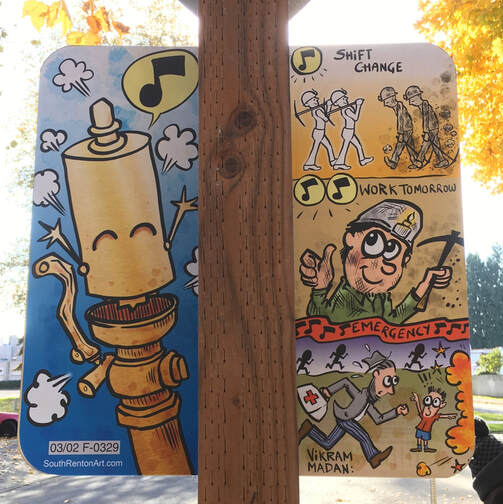 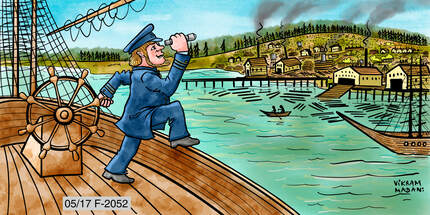 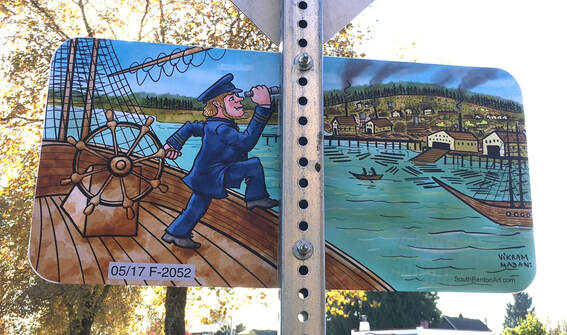 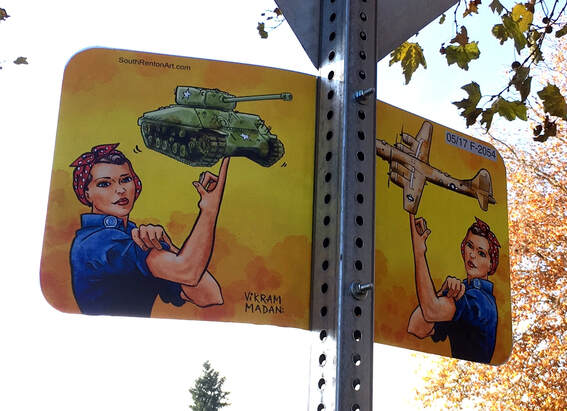 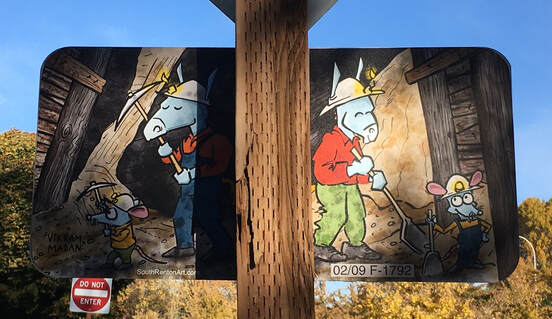 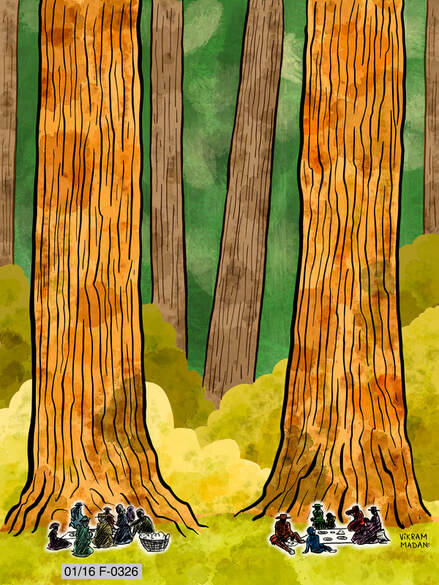 Hard to imagine now, but the Renton was home to humongous old growth trees, all of which were sadly cut down for lumber. Homesteaders would often picnic under these giant trees. 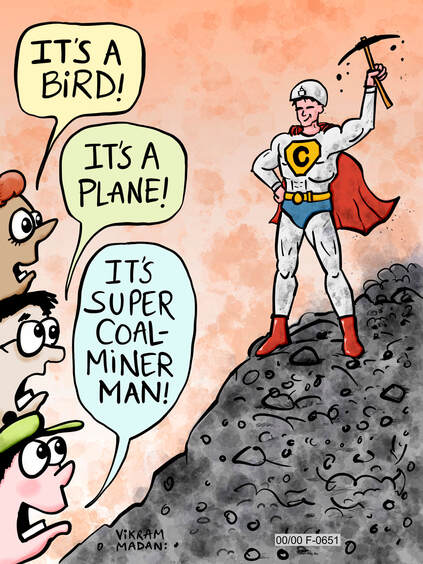 20. Tribute to [the superhuman effort of] Coal Miners

Renton would not exist as it does today without the super human effort put in by the original coal miners, whose efforts brought industrialization to the area. Coal-mining was back-breaking and dangerous work, involving long shifts and meager pay, and punctuated by cave-ins, explosions, fires, toxic gases, and flooding. Most miners were immigrants who came in search of jobs and the promise of creating better lives for their families. 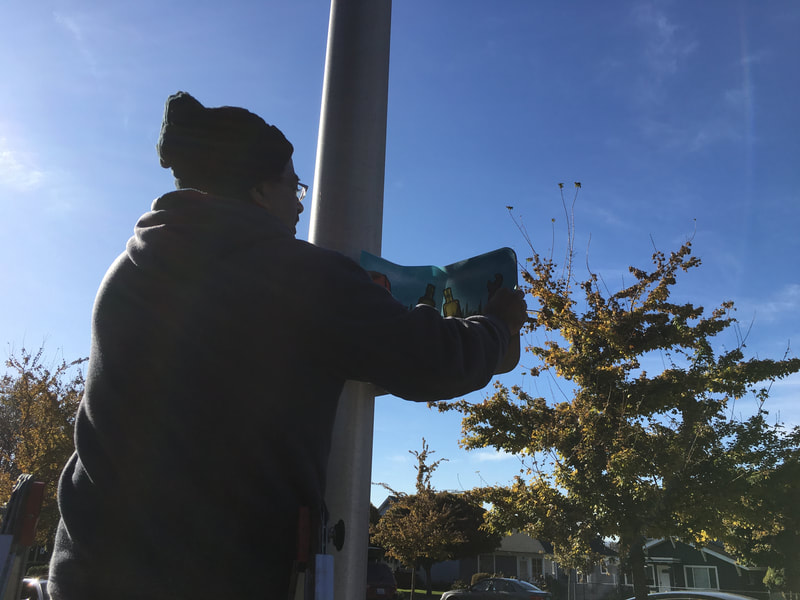 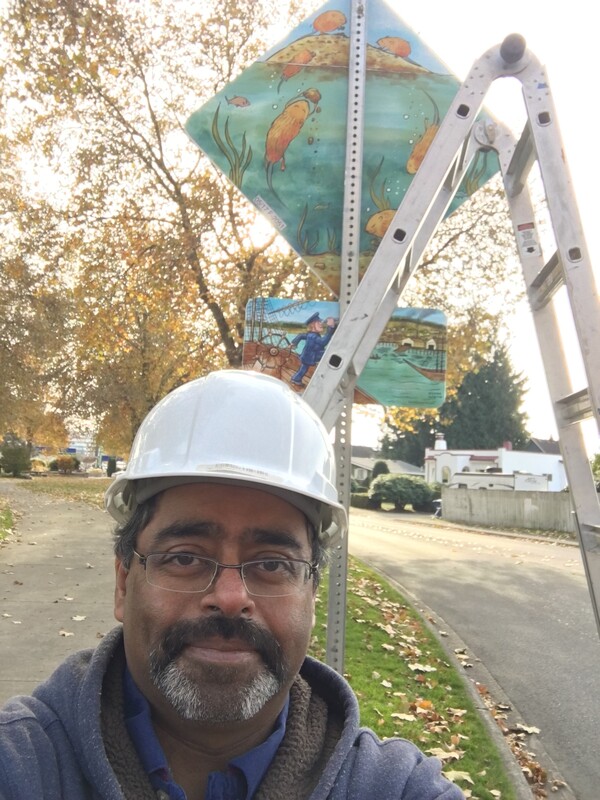 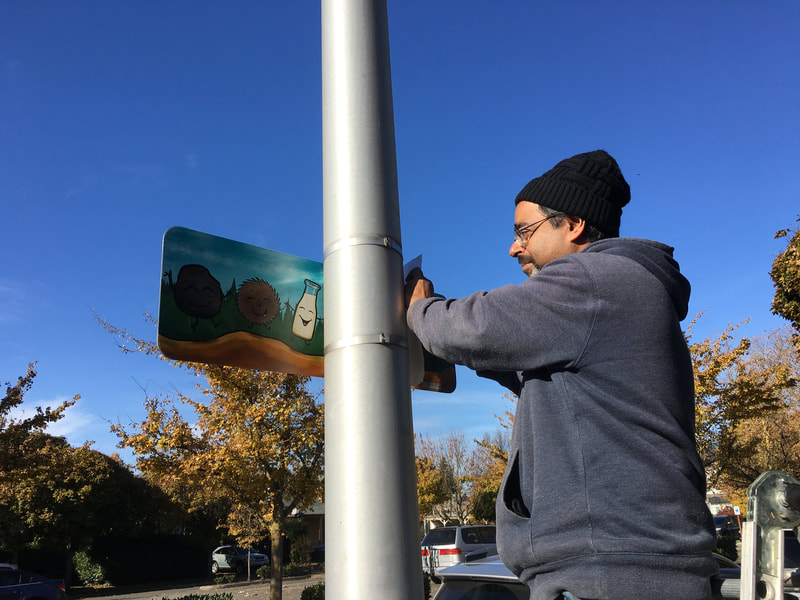 All artwork is copyright (c) 2019 by Vikram Madan.